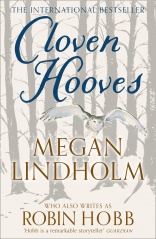 It was inside me. The more I sought it, the stronger it grew. It loved me. Loved me even if I couldn´t, wouldn´t, didn´t love myself. Loved me even if I hated it. It set its tiny teeth in my soul and braced and held so that I couldn´t crawl any further. And when I tried, a howl of despair burst from it, searing me, forbidding me to break so sacred a trust.
It was Smithy.