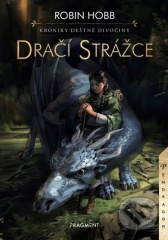 The Rain Wild Chronicles will be published in Czech by Fragment. The first part, DraÄÃ­ strÃ¡Å¾ce, was released on the 15th of November.

Free sample from The Book of Swords

Unbound Worlds is currently offering an excerpt of the first 50 pages of the Book of Swords anthology. The Book of Swords features a Six Duchies story titled Her Father’s Sword and as it happens to be the second story in the book, it’s fully included in this sample!

The Book of Swords has also started to appear around the world in translations this year, including Bulgarian, Italian, Polish and Portuguese. It will also have a followup volume titled The Book of Magic in October, which will include a new Megan Lindholm story.

Before you kill him, think of what you take from him. Remember what it is to be alive.