The latest Megan Lindholm story, Neighbors, is now also available in German and Polish. It was originally published in the anthology Dangerous Women in December 2013, which has now been translated.

Vote for Fool’s Assassin in the Gemmell Awards

It’s time again for the first round of voting in the David Gemmell Awards for Fantasy, and Fool’s Assassin has been nominated in two categories: the Legend Award for the year’s best fantasy book and the Ravenheart Award for the best cover (Jackie Morris’ UK cover art). Voting is open until the 15th of May.

Starburst Magazine has just revealed the cover art for the UK edition of Fool’s Quest. The book is scheduled to be released in August. You can find info about all the different editions and links for preordering at the wiki.

The UK cover art for Fool’s Quest is by Jackie Morris, the previously revealed US cover is by Alejandro Colucci. 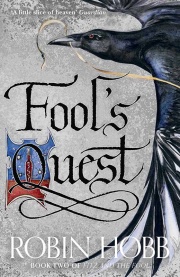 He had hoped it would goad Brashen into fury. Anger he could deal with better than this deep melancholy. To deal with anger, all you had to do was shout back louder than your opponent. Instead, he felt himself the horrible lurch of Brashen´s heart.

Paragon in "Ship of Destiny"