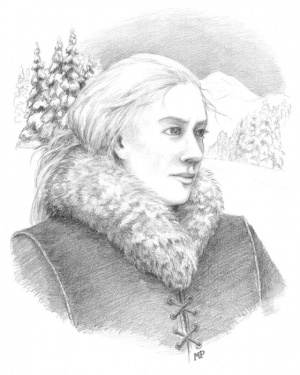 Wife of Verity, daughter of Eyod, sister of Rurisk, mother of Prince Dutiful. 4 years older than Fitz. Wed to Verity before she was twenty.

She is tall and blonde. Her badge is the vixen.

After her brother Rurisk dies, she becomes heir - Sacrifice - to the Mountain Kingdom.

Kettricken at first has difficulty adjusting to the differences in culture between her homeland in the Mountain Kingdom and the Six Duchies; she prefers austerity and is looked at askance by the Six Duchies' folk who expect their rulers to favor opulence. However, she eventually wins the hearts of several of the royal soldiers when she rides into battle during the Red Ship War; Foxglove becomes the leader of the Queen's Guard and proudly wears the Vixen Badge.

Fitz makes every effort to help her fit in and becomes her friend, which eventually makes her a threat in Regal's eyes. At Fitz's suggestion she embarks on a project to restore the Queen's Garden, but her ideas of gardening differ wildly from the lush greenery traditional to the Six Duchies. Her life and unborn child are threatened when Rosemary smears lamp-black on the long stair to the tower where the garden sits, but she survives.

Regal tries to use Kettricken as a pawn in his struggle to defeat Verity for the throne. After the death of King Shrewd, Chade and the Fool spirit the pregnant Queen away from the vicious Regal, although Regal succeeds in hampering their progress. During her time in the mountains, her child is stillborn. When Fitz makes his way to the mountains and presents her with evidence that her husband lives, she embarks on a quest to find him even as Regal declares Verity dead and is crowned King.

With Fitz, the Fool, Starling, and Kettle, she treks across the mountains to find Verity, who has found the quarry of the elderlings. While there, she becomes pregnant again with Verity's heir, Prince Dutiful.

Kettricken reigns as Queen while her son Dutiful is King-in-Waiting. With Chade, she arranges a match between Dutiful and Elliania, a Narcheska from the Out Islands.

When asked by a delegation from Bingtown and the Rain Wilds (at Tintaglia's request) if the dragons that flew during the Red Ship War can help Tintaglia in her search for a mate, Kettricken graciously and regretfully refuses to share information, keeping the secret of Verity's dragon.

Kettricken repeatedly urges Fitz to take what she sees as his birthright: a public place at court. She shows loyalty to her old friend and kinsman-by-marriage.

Oh, some folk ride to the wild-boar hunt
Or for elk they nock their arrows
But my love rode with the Vixen Queen
To lay to rest our sorrows.

She did not dream of fame that day
Nor fear what pain might find her.
She rode to heal her people's hearts
And my love rode behind her.