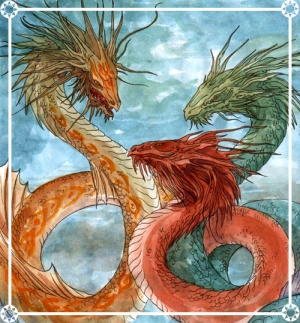 Sea serpents are creatures that will eventually evolve into Dragons. One of the known places where they have been born is the Others Island, where they wriggle into the sea after hatching from dragon eggs and spend time growing and shedding skin several times in the warm southern waters.

When the right time comes, they travel to the north to find their way to the Serpent River, accompanied by guides like She Who Remembers who give them the collected memories of their entire race. They build cocoons from the special sand that is only found in certain places along the river, mixing it with their own secretions. There they hatch all through the winter guarded by adult Dragons and Elderlings before emerging as new Dragons during the high summer.

For the sea serpents, the world is divided in two: the Plenty and the Lack - the Plenty being their familiar home, everything below the surface of the sea, and the unfamiliar Lack being everything above it. In contrast, the Dragons are the Lords of the Three Realms: Rulers of Earth, Sea and Sky.