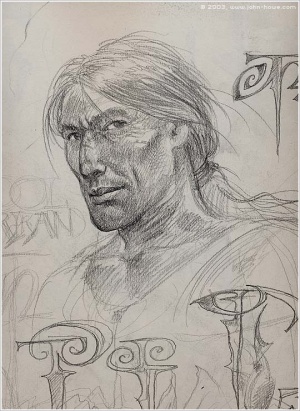 Sketch of Fitz as Tom Badgerlock by John Howe

An identity that Fitz takes for himself when he returns from the Mountain Kingdom after Verity has finished his dragon. Lady Patience used to call him Tom (a codename used to refer to him in the letters between Verity and Chivalry when he was growing up), so that could be why he picked that name, "Badgerlock" is part of his cover strory to explain his white streak of hair. He claims to have born with it and so his parents named him after it. Tom Badgerlock lives in a humble cottage near the ruins of Forge with his fosterson Hap, keeps some chickens and a pony called Clover. He makes inks and traders them for the few things he can't grow in his garden or otherwise make for himself. During harvest time he also hires for work. He has an old dog who looks suspiciously like a wolf, and is in truth Nighteyes.

Tom Badgerlock eventually comes to Buckkeep to act as the personal servant and bodyguard of Lord Golden. At that time he claims to be 42 years old, but that is 7 years past his real age. He instructs Prince Dutiful in both the Wit and the Skill.