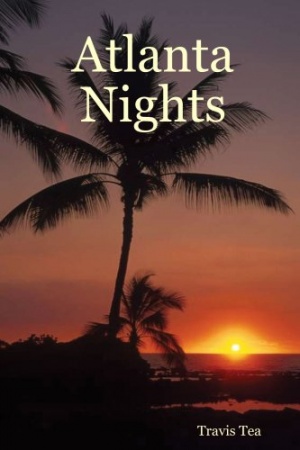 The cover of the Atlanta Nights
Atlanta Nights is a collaborative novel written by a group of U.S sci-fi and fantasy authors under the pseudonym Travis Tea to demonstrate that a publishing company PublishAmerica that claims to be a traditional publishing house is actually nothing more than a vanity press. PublishAmerica had also posted public statements that the quality bar for sci-fi and fantasy is a lot lower than for all other fiction and thus sci-fi and fantasy authors are no experts on writing so anyone trying to learn to write would be wise not to listen to their advise.

Atlanta Nights is a deliberately badly written book. It contains numerous spelling and grammar errors, duplicate and missing chapters, computer-generated nonsensical passages and changing details. Despite all of this, the manuscript was accepted to be published by PublishAmerica on 7th of December 2004. After consulting with a lawyer, the writers decided not to go through with publishing the book but instead made a public announcement about the hoax on 23rd of January 2005. The next day, PublishAmerica withdrew their offer to publish the book. The authors subsequently decided to publish the book through a print on demand publisher called Lulu with all profits going to the Science Fiction and Fantasy Writers of America Emergency Medical Fund. The publishing history of the book is recorded in an afterword included in Atlanta Nights, complete with copies of the emails from PublishAmerica.

Chapter 27 of Atlanta Nights was written by Megan Lindholm/Robin Hobb.