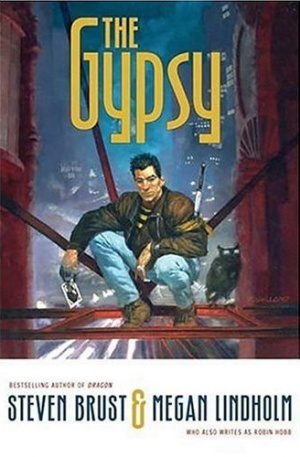 The cover of the Gypsy by Sam Rakeland (US trade paperback edition, 2005).

The Gypsy is a novel written by Megan Lindholm and Steven Brust who had previously collaborated on the Liavek stories. It blends elements of Hungarian folk tales with a modern day detective story in an urban setting. Some of the lyrics featured in the book were also recorded as an album called Songs from the Gypsy. "The Gypsy" has only been published in the US and as a French translation.

Megan and I first worked together on the Liavek anthology, though I've been a fan of her work since her first novel. This actually started as a bunch of songs I wrote with Adam Stemple (guitarist for Cats Laughing and Boiled in Lead), and then turned into the chapter of a book. I had no idea where the thing went after the first chapter (which ended up as the prologue), and I ended up sending it to Megan. We played tennis with it after that, and got together twice for editing sessions after it was done. I've never enjoyed working on a book more. I'm very happy with how it came out.
(From the Steven Brust website)

Of all the books I’ve ever written, I think this one was the most pure fun. This book began with a letter from Steven Brust. I’d collaborated with Steve on a number of stories for the Liavek anthologies in the 1980′s. We’d discovered that we shared many of the same philosophies about writing and story telling then. Out of the blue, I one day received a note from Steve. He said that he’d started writing a story and that some of the magic in it reminded him of one my other books. Would I care to try a collaboration?

Well, I was in the middle of writing some other book at the time and had no time at all to spare. I sat down to write him a note to that effect, but thought I’d just read the chapter he’d sent me one more time. And instead of writing him a ‘no, thank-you’ note, I ended up writing the next chapter of the story and sending it back to him.

When the manuscript next came back to me, it was three chapters long. I added another one, and sent it back. We volleyed the chapters back and forth for over a year. I don’t think either of us were sure it would ever find an ending, or if it did, that the ending would make sense. But at some moment, the tale simply found its own ending, one we both loved.

This book made me remember all the reasons why I became a writer in the first place. I’m pleased to see it become easily available again.

All English language editions of this book so far have been US editions with cover art by Sam Rakeland.