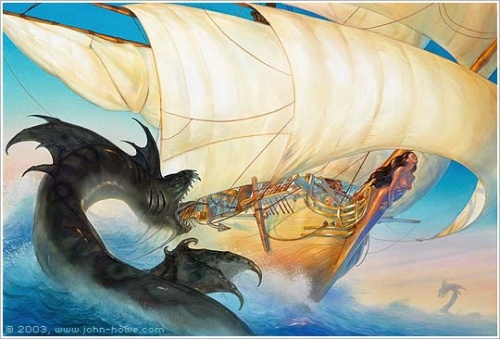 Vivacia is the liveship of the Vestrit family. She has golden colored locks of hair, a bare chest, and green eyes. She was built of the wizardwood cocoon that would have become the dragon Bolt.

She was quickened after Ephron Vestrit died. Althea Vestrit was thought to take her captaincy after his father, but instead, at Ronica's decision, Vivacia was inherited by her sister Keffria, thus Keffria's husband Kyle Haven became her captain. As he is not of the Vestrit blood, he decided to take their son Wintrow on board to keep Vivacia company.

Even though Vivacia was newly quickened, child-like, Kyle decided to use her as a slaver to gain larger profits to pay off the price of her to the Festrew family of Rain Wild Traders. As a liveship is able to feel the emotions of her crew and those aboard her this was not a wise decision. Not even the company of Wintrow could keep Vivacia happy, as he wasn't happy himself but wanted to go back to his monastery. This is why the pirate Kennit found it so easy to capture her‚ she didn't like her captain or crew. At the moment Kennit chose to conquer her there was a slave uprising going on and no-one was tending the sails or the wheel. Under the normal circumstances wooden ships can't overtake liveships as they are able to help their crew.

Kennit, being of an Old Trader family himself, was able to make Vivacia happier than Kyle could, and though she had a close family bond with Wintrow, Kennit knew how to relate better to a liveship.

Vivacia was awoken to her dragon origins by the serpent She Who Remembers, becoming something between a Vestrit and the dragon Bolt.

The Crew of Captain Ephron Vestrit

The Crew of Captain Kyle Haven

The Crew of Captain Kennit