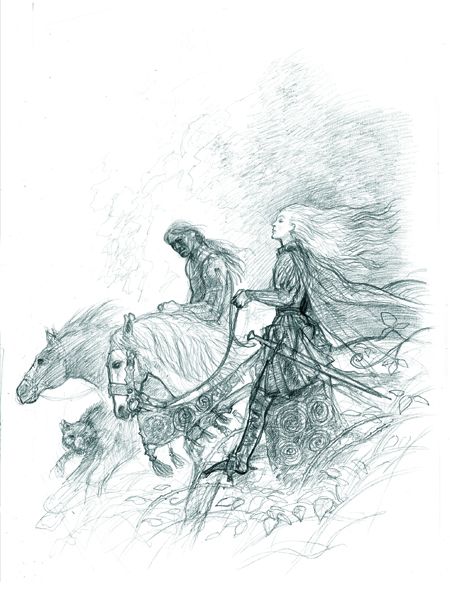 Sketch for the cover of Fool's Errand by John Howe.

John Howe is a Canadian born illustrator living in Switzerland. He is best known for his work with J.R.R. Tolkien's worlds - both the original books and the movie adaptations by Peter Jackson.

Howe illustrated the original covers for the UK hardcover and paperback editions of the Farseer, Liveship Traders, Tawny Man and Soldier Son trilogies. However, his art for Renegade's Magic was only used for the hardcover and large format ("trade") paperback, the normal-sized paperback was published with cover art by Jackie Morris. HarperCollins rereleased all the trilogies with new covers around the same time the RM paperback was published and chose to switch cover artist for the last book.

John Howe has also illustrated the following Megan Lindholm book covers in the UK (all paperback):

More recently, new art by John Howe has appeared in the UK slipcased hardcover edition of Assassin's Apprentice by Harper Voyager to mark the book's 20th anniversary and in 2016, which was followed by matching editions of Royal Assassin and Assassin's Quest. Another hardcover set of the Farseer trilogy was also published in the US by Subterranean Press which also featured new cover art by John Howe.

John Howe has published several books about fantasy art and drawing, of which the following are especially interesting to Robin Hobb's readers:

John Howe has graciously allowed fans to use his paintings on websites according to these terms. Please note that the copyright of his art remains intact despite the fact that we are using it here.