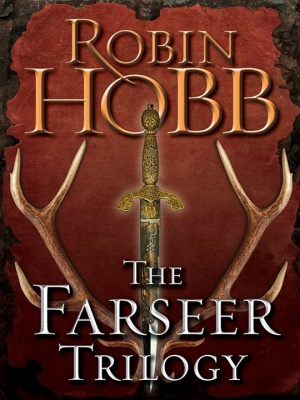 Cover for the Farseer trilogy bundled for Kindle.

The Farseer trilogy is the first segment of the Realm of the Elderlings novels, and the first ever story published under the pen name Robin Hobb. The trilogy tracks the years of the Red Ship War in the Six Duchies as experienced by a young royal bastard, Fitz.

The novel The Willful Princess and the Piebald Prince takes place chronologically before Assassin's Apprentice, as does the short story Cat's Meat. The short stories Blue Boots, Words Like Coins and Her Father's Sword take place around the time of Assassin's Apprentice and Royal Assassin. None of these are prerequisite reading before starting the trilogy. The trilogy is followed chronologically by the Liveship Traders trilogy.

Robin on signing the contract:

On the 13th day of July in 1993, I signed a rather nebulous contract with Bantam Books to write a trilogy. Book one had the working title Chivalry's Bastard. Megan Lindholm agreed to write three books about this fellow, each about 125,000 words. The description of the trilogy that Bantam was agreeing to buy was as follows:
" . . . a sophisticated fantasy trilogy incorporating the archetypes of the genre (e.g, magic, evil villains and a young hero named Fitz who is the bastard son of a prince). In Book #1, Fitz is sent on a quest to bring a princess back to the Mountain Kingdom. The plot lines for Books #2 and #3 shall be determined well in advance of the scheduled delivery date for that Book." [1]

On the origins of the story:

This series also had a number of years to incubate before I started writing it. It came from a question written on a scrap of paper that I kept in my top desk drawer: 'What if magic were addictive? And what if the addiction was destructive or degenerative?' From there, almost everything developed. A very common concept in fantasy is that power or magic has to be paid for in some way. So the idea that it would possibly be physically degenerative or an addiction where, very much like The Lord of the Rings, you start out wanting to use this ring to do good things for people, and gradually it takes you over, is a very old idea. For me, that was the germ that gradually grew into this whole thing. [2]

For cover art of special standalone editions, audiobooks and translations, see the the article page of each individual title.

US hardcover edition 2016 by Subterranean Press