This hopefully serves as a rough draft for what the main character pages could look like. Feel free to edit, add and use as a template elsewhere in this wiki. Use the discussion page to solve any problems. 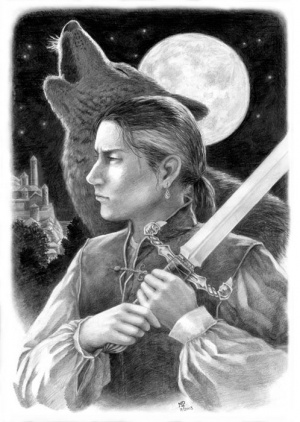 Fitz and Nighteyes by Maija Pietikäinen.

The bastard son of King-In-Waiting Chivalry, bonded to the wolf Nighteyes. Witted and Skilled. Sole narrator of the Farseer and Tawny Man trilogies. Also narrates parts of the Fitz and the Fool trilogy.

Fitz has many aliases in the trilogies.

Fitz, the name most commonly used by people in reference to him, although there are also variants on this, such as uncapitalized 'fitz' on his first appearance at Buckkeep castle, called so by Burrich.

FitzChivalry Farseer is his official name, recorded by Verity on his coming to Buckkeep, named for what he was: the bastard son of Chivalry.

Keppet, the name that his mother was thought to have given him, as heard in various memories Fitz has of her.

Nameless the dog-boy, used as a derogatory name for Fitz when he was a child, by Regal and his hangers-on at court, in response to his living and working with the dogs in the stables.

Newboy, a nickname given to him by the children he became friends with in Buckkeep town and his sweet-heart, Molly.

Tom, the code name given in the letters between Chivalry and Verity, stemming from Verity calling Fitz a little 'Tom-cat.'

Thomas, what Patience calls Fitz, most probably stemming from the above name.

Changer, what he was named by the Men of the mysterious Naming Ceremony that took place in his youth, and also the name given to him by Nighteyes.

Catalyst, a title given to him by the Fool.

Tom Badgerlock, an alias taken on after the Red Ship War when he wanted Fitz to remain dead. As well as being another name, Tom Badgerlock gradually became a whole other persona. When asked why the name Badgerlock, he states he was given the name by his parents after being born with a white streak in his hair, that was actually the result of a blow to his head.

Beloved, taken in the tradition of the Fool's country, giving names to one another that tell of the bonds that you share.

Cob, a name he took briefly in his travels.

Jory, a name he decided to use during his travels.

Bed Bolster, a name used jokingly by the Fool when Fitz was recovering in the Mountain Kingdom.

Sir Spoon, a name given to him by Fool regarding the stirring or "twirling" that Fitz undertakes in his role of Catalyst. Fool requested that Fitz forgo his twirling for a time and, if he chose not to, he would ultimately be the death of kings.

Dark haired, dark skinned and dark eyed, Fitz is considered typically Farseer-like in his looks, baring a striking resemblance to his father. Although he does not think himself so, Fitz is also said to be handsome, even with his numerous scars. He is quite tall.

Fitz is the son of prince Chivalry Farseer and an unknown Mountain woman. Fitz's grandfather brought him to Verity when he was about six years old. Verity was in Moonseye at the time, so his mother probably lived nearby. As he was a bastard of the King-in-Waiting, he was the reason for his father's abdication from the crown. Fitz doesn't remember his childhood before coming to the Farseers, or has decided to forget it, hence always being vague when it comes to his age. He actually has some memories, but denies remembering them and later puts them into a Stone-dragon.

Fitz was given to Burrich, Chivalry's right hand man, to raise.

Fitz grew up in Buckkeep. He first lived in the Buckkeep stables with Burrich. His first companion and friend was a puppy, Nosy, with whom he formed his first Wit-bond. With Nosy he roamed around in the Buckkeep town and was known there as Newboy. As Newboy, he came to know Molly Chandler.

When Burrich noticed their Wit-bond, Nosy was taken away from him and Fitz believed Burrich had killed him.

When he got King Shrewd's attention, he got a room in the keep and formal training of a royal.

After the death of his father, lady Patience moved to Buckkeep to protect him and to see that his training was appropriate for a prince's son.

After Shrewd's recognition of him, Fitz swore an oath of loyalty to always serve the Farseer throne. Fitz started to take lessons in Buckkeep, learning around the hearths with various cousins and other royal children, and taking lessons in things such as reading and writing with Fedwren. He also got weapons training and a horse, Sooty. Around this time, he also started to take secret lessons with Chade to become a Buckkeep assassin, learning to be swift, competent and quiet by various childish games and pranks, such as hiding the cook's scissors and having to memorize objects he had only seen briefly or in passing, and his loyalty to Shrewd was tested to its limits.

It was at the beginning of Fitz's training that the Red Ship War started, and the need for more people to be trained with the Skill arose. After being tested, Fitz showed Skill ability and started his lessons with Galen, the Skillmaster. Galen was said to hate Fitz as much as he loved his father, and was openly harsh with him in lessons until Burrich challenged him in front of the Witness Stones, on the agreement that if he won it was the will of the gods that Fitz had the right to learn the Skill unharmed and despite his bastard blood.

He made friends with the King's Fool, even if they couldn't publicly show it. The Fool said they were there to change the world.

Actions during the Red Ship War

Poisoning the Forged, serving aboard the warship, meeting Nighteyes, dying, travelling to the Mountain Kingdom and back, Regal, Kettricken, Verity teaching the Skill, reasons leading to following the trail of Verity, Jhaampe, Kettle, the ruined Elderling city, fathering of Dutiful, giving up on Molly, killing all the bad guys. Elfbark should probably be mentioned here.

Tom Badgerlock Basically covered in the end of AQ and in the first few chapters of FE where he accounts his doings to the Fool. Travelling around with Nighteyes, visiting Cursed Shores and Bingtown, finding the cabin, Starling visiting, Hap, Jinna

Acting as a servant to Lord Golden, going after Dutiful, the death of Nighteyes, problems with Jinna, Hap and the Witted.

Journey to Aslevjal and beyond

Sailing to the Out Islands, journeying above and belove the glacier, meeting the Pale Woman, travelling through Skill-pillars several times, bringing the Fool back to life.

Living with Molly and her children in Withywoods, the birth of Bee.