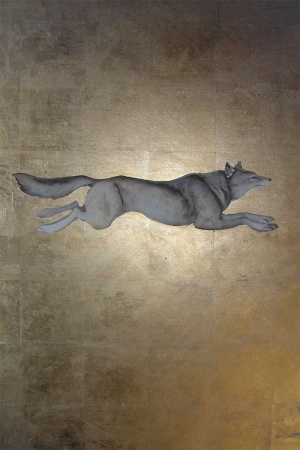 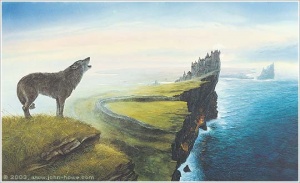 Nighteyes is a wolf, larger than the very big domesticated dog that Fitz tries to pass him off as on numerous occasions, not always successfully.

In temperament, Nighteyes proves to be a humorous if somewhat caustic companion with a pragmatic streak. Those closest to him he deems "Pack," and he's frequently impatient with Fitz's habit of living either in the past or borrowing trouble from the future. Nighteyes' own approach is to live for and in the moment.

Nighteyes was captured by a trapper who killed his dam and his litter mates for their hides. He spent his puppyhood for sale in a trapper's cage until FitzChivalry heard his cries through the Wit and saved him.

Fitz brought him to Buckkeep where he stayed in an abandoned drover's (or herder's) cottage on the edge of the grounds. Fitz spent as little time with Nighteyes as possible, intending because of Burrich's strong sentiments against using the Wit to restore the cub to health and then send him away. Despite his best efforts, Fitz found himself Wit-bonded with Nighteyes.

For most of the first summer of the Red Ship Wars, Nighteyes was little involved until the battle at Bearns, where he, Fitz, and Burrich fought side by side to protect Queen-in-Waiting Kettricken. It was after this battle that rumors first started naming Fitz "the Witted Bastard."

Nighteyes was instrumental in Fitz's recovery from Regal's dungeon, taking Fitz's spirit into himself so that FitzChivalry's dead body could be buried. When it came time to put Fitz back in his body both Nighteyes and Fitz fought the command, but Burrich forced them to obey and Fitz was restored to his own life in his own body.

After Fitz's return from death, Nighteyes stayed with him and Burrich at a cottage while Fitz recovered. After Burrich left, Fitz decided to be as much a wolf as he was able to and he and Nighteyes spent the better part of the summer living as wild wolves. In late summer, Fitz decided he wished to have revenge on Regal.

Nighteyes and Fitz followed the Buck River through Farrow and Tilth, hunting Prince Regal. Nighteyes found an opportunity to join a pack of wolves, which he did for a time, but eventually decided that he would rather be with his Wit-bond, Fitz. No sooner had they found Regal than Fitz was Skill-commanded to find King Verity. During their search, they were ambushed in the mountains by another Witted one with a group of hunters from Regal, but they successfully escaped.

Nighteyes found the Fool and brought him to the severely wounded Fitz, who had been shot with an arrow by Regal's hunters. The Fool brought them both back to his cottage in the Mountain Kingdom. During Fitz's recuperation, the "Scentless One" and Nighteyes became close and this bond strengthened throughout the rest of Nighteyes' life.

Once Fitz was healed, he, the Fool and Nighteyes all set out with Queen Kettricken, Kettle and Starling the minstrel to find Verity beyond the Mountain Kingdom. Along the way Nighteyes was instrumental in their survival as he watched both in front of them and behind them with his seemingly limitless ability to run. He also did a lot of the hunting during the journey, and on many occasions caught meat the party would not have survived without. Along the way he is able to observe that Kettricken had a small predilection for the Wit and through that he was able to create a semi-bond that helped Kettricken get through the hard times they came across during their trek to find her husband, King Verity.

After the Red Ship Wars, Nighteyes and Fitz spent several years wandering the Six Duchies and beyond, getting as far as Bingtown before settling in a cottage not far from Forge. Then followed several years of quiet rural life, during which time they raised Hap to apprenticing age, interrupted only by occasional visits from Starling the minstrel.

With the return of the Fool, Fitz began in earnest to think about returning to life at Buckkeep. Nighteyes tried as much as he could to withdraw from their bond to hide his frequent great pain. One day Nighteyes choked on a fish and his heart stopped. In panic and grief, Fitz used both the Wit and the Skill to force him to return to life, although it took the Fool to complete the intervention and halt Nighteyes' death. Infuriated with Fitz's meddling in what Nighteyes intuited to be the natural order of things, Nighteyes withdrew his Wit contact from Fitz.

By the time they returned to Buckkeep, Nighteyes had forgiven Fitz as much as he was able to and they headed out in pursuit of the runaway ‚Äî or possibly kidnapped ‚Äî Prince Dutiful and the splinter Old Blood faction known as the Piebalds suspected of possessing him. It is during these adventures that Nighteyes began to truly show his age, failing to keep up easily with Fitz and the Fool as they pursued the prince and only able to catch up infrequently. Nevertheless, he provided what help he could being left behind again.

After Dutiful recovered, Nighteyes died of old age at Fitz's side. Fitz burned the corpse, as is proper for any Six Duchies deceased, and shaved his own head in traditional mourning for his beloved, departed Wit beast.