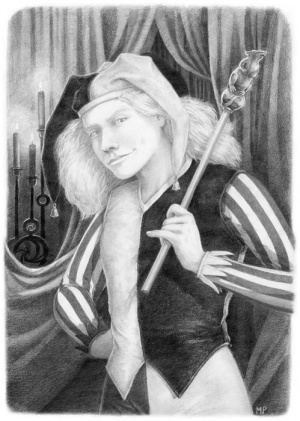 the Fool by Maija Pietikäinen.

The Fool is a character of many roles. He was named Beloved by his mother but only a few people know about that identity. Fitz first meets him as the jester of King Shrewd. The Fool himself claims he is the White Prophet and that Fitz is his Catalyst. After the Red Ship War he spends a time in Bingtown and the Pirate Islands as a female carpenter called Amber. When he returns to Buck, he assumes the role of a Jamaillian noble called Lord Golden and travels to Aslevjal to change the fate of the world knowing that it will be the end of his life.

"Whence comes the Fool and why?"

According to his own words to Fitz, the Fool was born far, far to the south and of ordinary folk. His land is past the edges of every map Verity has ever seen, and past the edges of the maps in those countries. One must go south, and then east across a sea to find a long peninsula, and on its tip the village where he was born. He had a loving mother who had a long, dark curling hair and green eyes. He had two cousins as fathers, as was the custom of that place: one was broad and swarthy and full of laughter, ruddy-lipped and brown-eyed farmer who smelled of rich earth and open air. The other was as narrow as his cousin was wide, gold to his bronze. He had blue eyes and was a poet and songster. The Fool also had an older sister with golden hair who used to spoil him outrageously. When he first arrived at Buckkeep he delibarately let people think that he had little understanding of the Six Duchies language although that was not the case. His mother tongue however was something else, and for decades he did not use it at all until he met Prilkop.

The Fool's colouring was different from the beginning, marking the fact that somewhere in the distant past a White had mingled his blood with an ordinary folk and that the baby was born to take up the tasks of that folk. That is why he was soon sent to a place where he was educated and all his dreams were recorded. When he was old enough, he was taught the art of the quill so he could record his dreams more precisely. One day he claimed to be the White Prophet of this age but his masters said it wasn't possible, for there can only be one White Prophet for each time, and that they had already prepared her and sent out to fulfill her destiny. They couldn't tell him what he was if he wasn't a White Prophet although he had all the traits of one, and he soon ran away.

The Fool was taken into the Royal Court at Buckkeep as an anomaly, his incredibly pale colouring and slender and flexible form marking him out as something unusual. He became devoted to King Shrewd, using his position close to the King to observe everything, often making cutting or blunt remarks that could be laughed away as a Jesters prattle. It was said that he was a gift from the Bingtown traders, but that has never been confirmed. To Fitz he said that he sold himself to the king much the same way as Fitz did: loyalty for protection. He had been at the court scarce a season before he heard the rumour of Fitz' existence and knew he had found what he had started out to look for, his Catalyst.

While he kept himself away from most of the population of Buckkeep (and they, in turn were wary of him), he and Fitz formed a friendship, clumsy at first, but through the years it grows into a bond above and beyond mere friends.

The gender of the Fool

There is much debate about the sex of the Fool. While the Fool protects his claim to masculinity throughout the years in Buckkeep as the jester and the journey to the Mountain Kingdom, his appearance as a woman called Amber in Bingtown confuses the matter. There are also several good arguments for his being female made by Starling. However, when the Fool later returns to Buckkeep, it is in the guise of another male, Lord Golden.

Generally, "the Fool" and "Lord Golden" are given masculine pronouns - and "Amber" is given feminine - as it is recognised that all three 'characters', though technically the same person, are distinct facets of the character as a whole.

The Pale woman who had known the Fool since he was a child refers to him as a male. 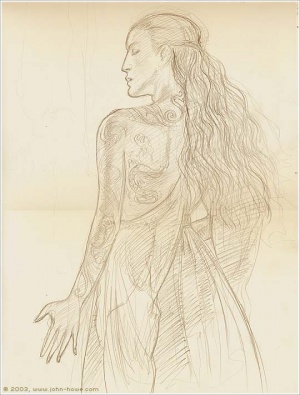 Sketch of the Fool by John Howe

When he first appeared in Buckkeep, the Fool was completely white save for his two pale blue eyes, but by the end of his errand to the Out Islands he is a deep brown, compared to the colour of wood.

Throughout the years, the Fool develops severe fevers (often at the most inappropriate moments) that leave him a slightly darker shade of gold by his skin peeling as if sunburnt (a process which causes slight itchiness and a lot of irritation) and his iris's changing colour, enabling him to create the new personas of Lord Golden and Amber for himself without rousing suspicion, though it is never revealed for certain why this happens. Prilkop, who undergoes the same development himself, leaving him completely black, gives a possible explanation that the fevers relate to the White Prophets' impact on the future and fate. 'Perhaps as we cause change, we change'. This is a reasonable enough explanation, as the unsuccessful White Prophet the Pale Woman stayed completely white all of her life despite being older then the Fool.

Although the Fool is regularly described to look very fragile and slender, he is actually quite strong. His appearance and movements is often compared to that of a bird, and interestingly one of the six charms he purchased from Jinna the hedge-witch as Lord Golden is for attracting birds. He says that those charms do not affect him as a White the same way as they affect humans, making Fitz perceive that there are oddities in the Fool he hasn't thought of before, like the way his wrists attach his hands to his arms and the airiness of this hair.

All during his years he has no tolerance for cold temperatures. His skin is usually very cool, and even a bit of warmth in it is a serious fever for him. He has dragon and serpents tattoos in his back, very much alike to those Elliania has. He was tattooed so after the order of the Pale Woman when he was just a child and in the school his parents sent him to.

"What do who call me when?"

The Fool told Fitz that he deliberately did not take a name for himself when he first came to Buckkeep, and that Fitz was the only one who really saw him and started to use the title as a name. When he comes to visit Fitz after the 'Amber period' in Bingtown and Fitz wants to know what people call him now that he is not the Fool anymore, he evades the question. When Fitz asks what he should call him, asks for his true name, the Fool tells Fitz that his mother simply called him Beloved.

Nighteyes, Fitz' wit-bonded wolf, is comfortable with calling the Fool the Scentless One.

The Pale Woman tells Fitz that in the Fool's homeland, the custom is to exchange or trade names with your true love. Later, after Fitz returns the Fool to life using a combination of Wit and Skill and calls the Fool 'Beloved,' the Fool asks him to stop as the Pale Woman had mocked him with the name during his time in her captivity at the Glacier Plains where she killed him.