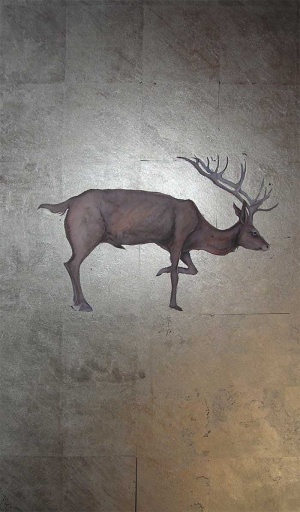 The Farseer Buck by Jackie Morris

Farseers are the ruling family of the Six Duchies, a line which started with Taker who arrived from the Out Islands, and continues to King-In-Waiting Dutiful and then, presumably, his son Prosper.

The Farseers use blue color and an image of a buck as their heraldic symbols. The buck's head is reserved for true loyalty such as Regal and Verity. The men-at-arms of their court wear a leaping buck. Fitz uses a buck's head too, done in silver thread and crossed diagonally with a red stitching to show his bastard status. He later changes this symbol to a charging buck after the suggestion of Verity.

The Farseers were descended from the Outislanders who came after Taker had captured Buckkeep and who kept up their ties to their homelands for several generations, bringing brides of their own folk to their new home. This is why the Farseers have an appearance that is somewhat different from the Six Duchies folk. They have black hair and dark eyes and muscled, stocky limbs and often a predilection for the Skill.

The Line of Inheritance

Inheritence of the crown is chronological; the eldest child of the reigning monarch, or the nearest relation with the strongest Farseer blood will be first on the throne, regardless of gender. At 16, the oldest heir will become King- or Queen-in-Waiting, a position designed to give the potential ruler the power he or she desired while helping teach the responsibility that goes with it before they ascend to the throne.

If a ruling Farseer dies and the King-in-Waiting or Queen-in-Waiting is not yet adult, the ruler's spouse will continue to rule over the Six Duchies, even if he or she contains less Farseer blood than their children.

Most of the Farseer line show themselves in possesion of the Skill, and throughout the their history have used Skill-coteries. The Skill was taught to all royalty, save for a brief period from King Bounty to Queen Kettricken, when it was only taught to Princes, and from then on was taught to all in the Six Duchies who showed a talent for it, royal or not.

There is a large history of infidelity amongst the Farseer royals, with both the men and the women of the line having bastard children in and out of court, as seen with Fitz, Chade, Charger and Galen. While still being scandalous, it does not appear to be that unnacceptable to have a bastard, and are thus allowed to live at court, and even wear the family crest, albeit with a red line embroidered through it to show their illegitimate birth.

The Farseer line has a tradition of naming nobles after the virtues they wish them to hold, and they often do, sometimes in extremes and other times only subtly showing the characteristics they are named for. The names can be something seen as entirely positive (such as Verity), or something ambiguous in nature (as seen with Shrewd). Folk beliefs claim that the names were sealed to newborn babes by magic, "passed through fire and plunged through salt water and offered to the winds of the air" and that they were later incapable of betraying the virtues whose names they bore. It is unclear whether such a ritual once existed and if it was really binding.