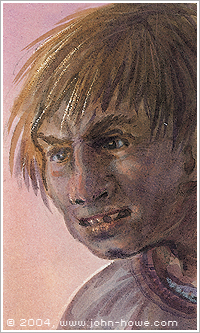 A Skilled half-wit who perceives the Skill as music. Ostensibly he works in the Buckkeep kitchens, but is actually a servant of Chade; Thick is supposed to take care of Chade's tower room. Later he appears to be Prince Dutiful's favourite, or pet, but he is in truth a part of Dutiful's Skill-coterie.

He is short and pudgy, has small ears that are snug close to his head and raggedly cropped hair. He keeps the end of his tongue pushed out of his mouth and the set of his eyelids makes him appear sleepy. His clothes were at first second-hand and too big for him, but since his talent was discovered, he's had clothes that mark him as the Prince's man. Fitz estimates his age to be in his late twenties.

He learned the Skill from his mother as a music that she sang to him. She was a part of a travelling group of musicians with Prokie and Jimu, and while they performed, the child Thick went among the audience, cutting their purses. Thick doesn't have brothers or sisters; according to Prokie his mother was too old, and that's why Thick was born the way he is. It is unclear whether Prokie was his real father, but in any case he refused to call him father. The group came to Buckkeep for the Springfest of the same year that Chade took him in as a servant. Thick's mother was found dead one morning, and the rest of the group abandoned him. In Thick's memories his mother was a short, stout woman with long greying hair bundled into a knot, with deep lines in her face.