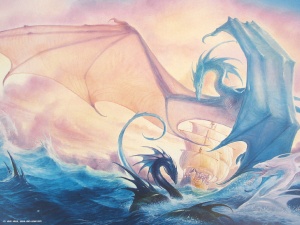 Tintaglia by John Howe
Dragons hatch from cocoons that sea serpents have spun around themselves after migrating from the sea up the Serpent River and spending the winter encased in the memories of their race.

A male dragon is called a drake whereas a female is a queen.

Dragons are as large as a ship and their wings are almost as large as their bodies in length. Their skin is scaled and the color of their skin varies. Not to be confused with Stone-dragons, although this was often a common mistake. Dragons have the habit to take whatever they want. If they see a deer from the sky, they will jump on it and eat it if their hungry.

The relation between dragons and humans is a difficult one because dragons are of the opinion that humans are like children, because they live much longer than humans and consider themself therefore more mature then humans. But dragons can make deals with humans although they will see it as indulgence from their side towards the humans who should be thankful for that.

The relation between dragons and Elderlings is a more complex one, because the Elderlings share their lives with them. Their relation might be compaired with a symbiose although this one seams to be a conscious symbiose.